TELL THE STREET YOU SAW ME 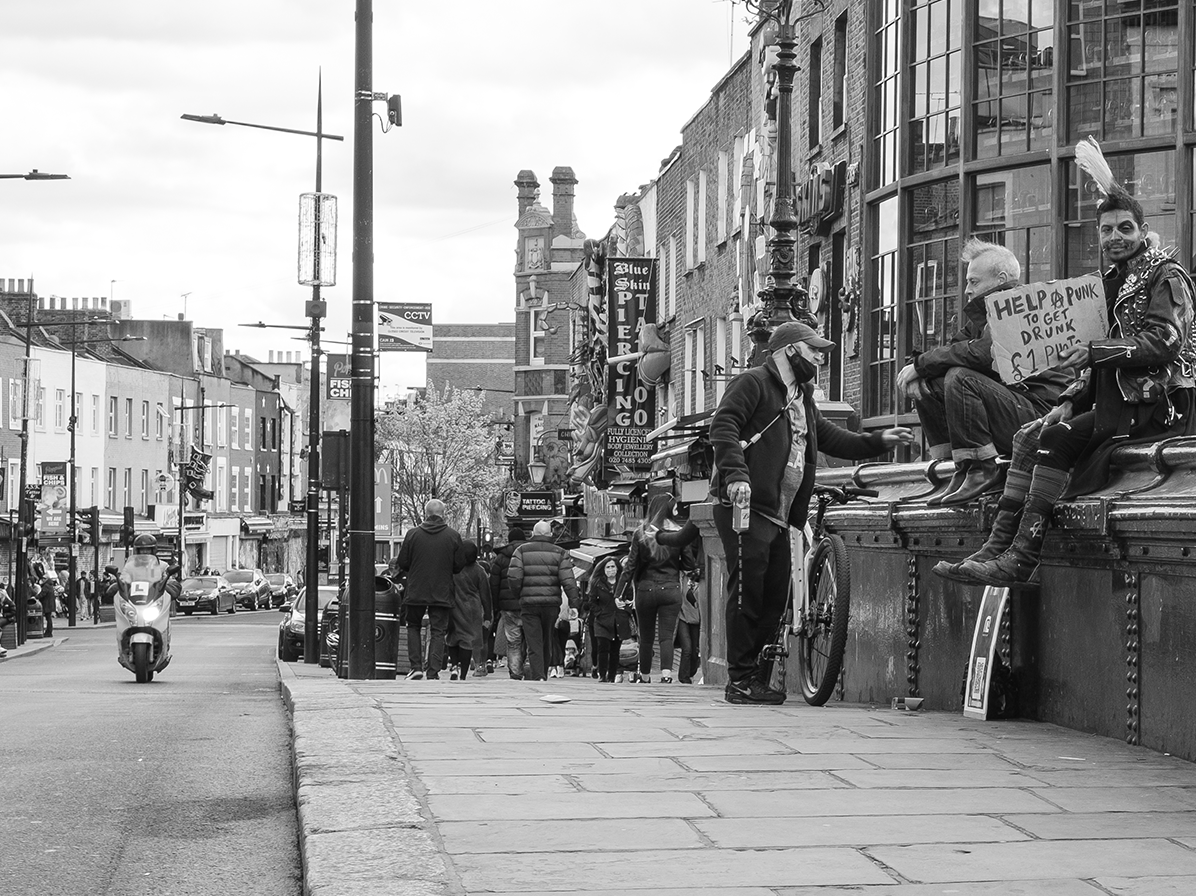 Following the success of her first solo exhibition, the new breath-taking prints capture unique and unguarded moments from two of the most iconic cities in the world, London, and New York. With her trademark style of championing street photography as a pure form of visual art, the images will showcase unmediated, unrehearsed, and beautiful spontaneous moments.

Tell the street you saw me is an immersive experience of 29 photographs and will transport visitors to witness intimate freeze-frames of countless individual stories, played out in front of Lucia’s lens and captured expertly. Ten percent of all sales will be donated to the Mail Force Ukraine Appeal, helping refugees settle into their new lives in the UK. 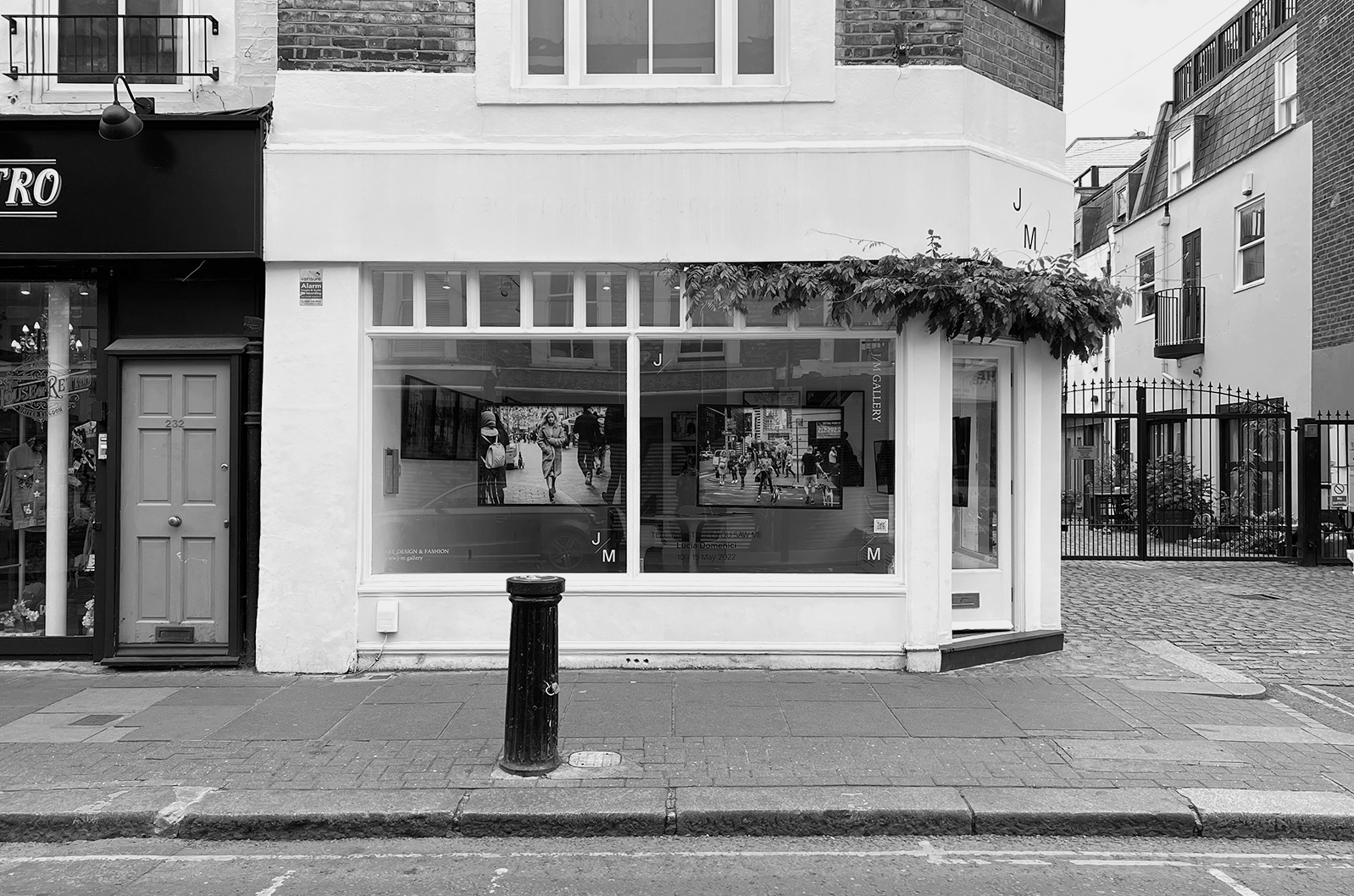 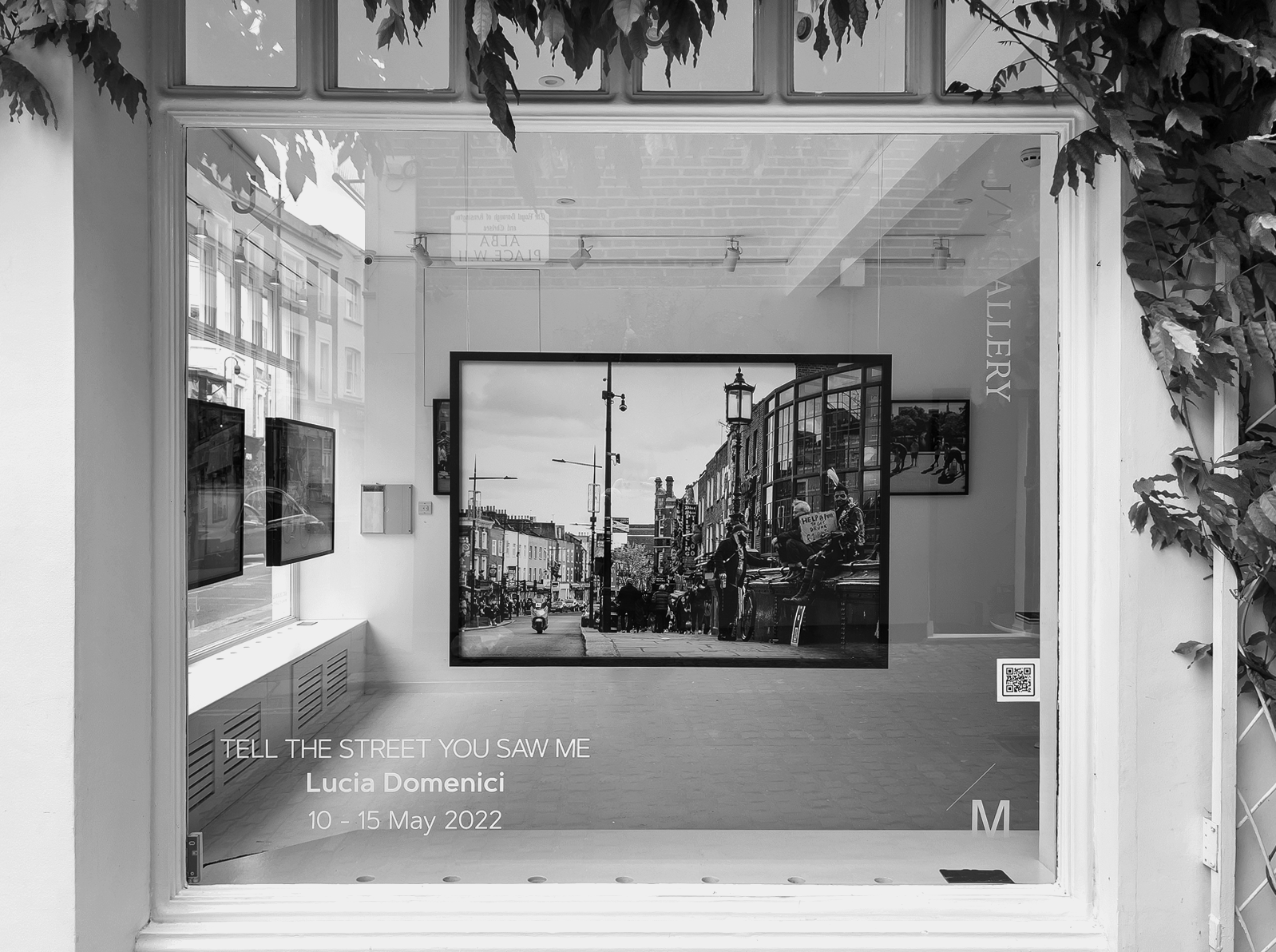 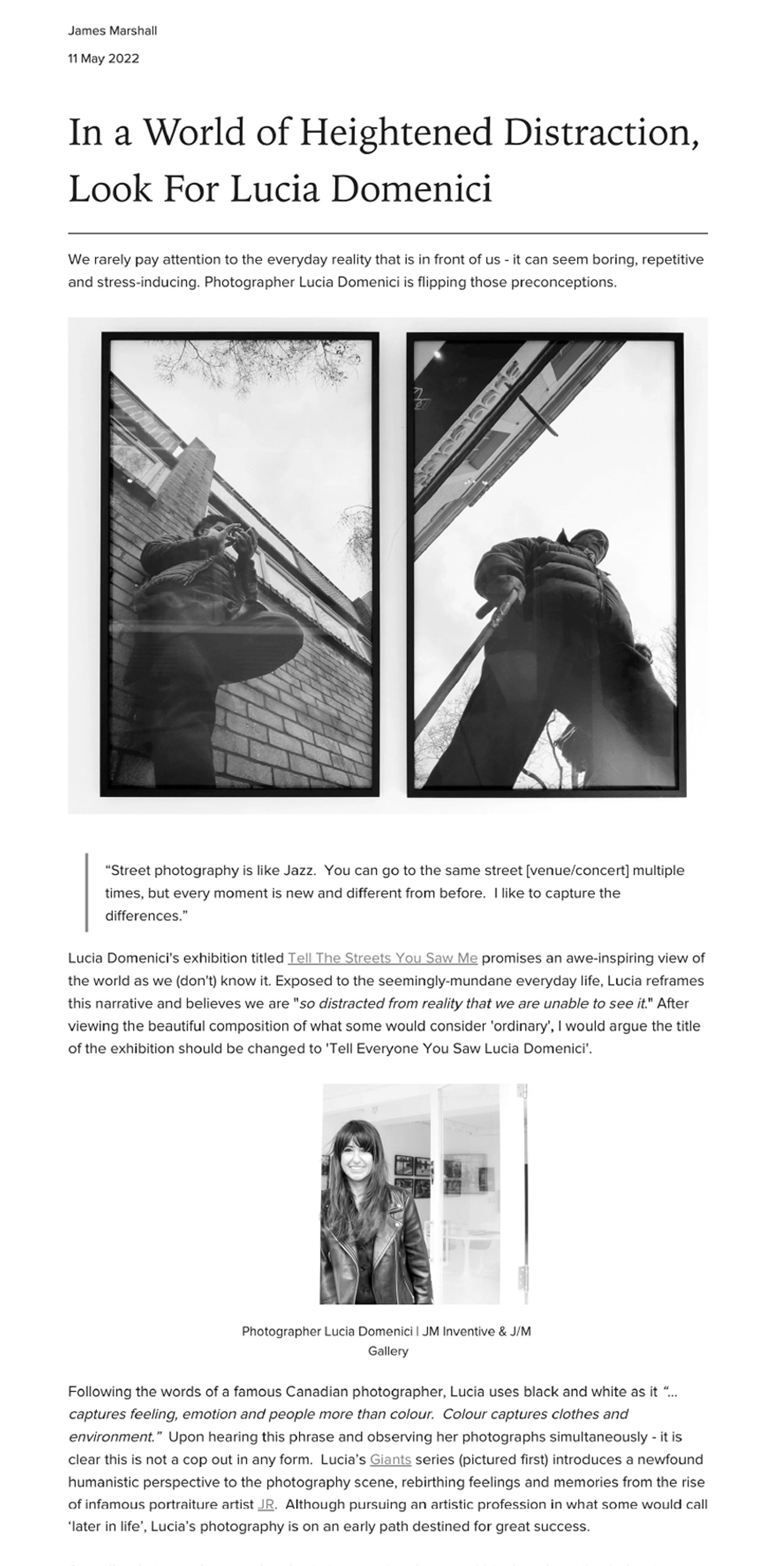 In a World of Heightened Distraction, Look For Lucia Domenici

We rarely pay attention to the everyday reality that is in front of us - it can seem boring, repetitive and stress-inducing. Photographer Lucia Domenici is flipping those preconceptions.

“Street photography is like Jazz. You can go to the same street [venue/concert] multiple times, but every moment is new and different from before. I like to capture the differences.”
Lucia Domenici's exhibition titled Tell The Streets You Saw Me promises an awe-inspiring view of the world as we (don't) know it. Exposed to the seemingly-mundane everyday life, Lucia reframes this narrative and believes we are "so distracted from reality that we are unable to see it." After viewing the beautiful composition of what some would consider 'ordinary', I would argue the title of the exhibition should be changed to 'Tell Everyone You Saw Lucia Domenici'.

Following the words of a famous Canadian photographer, Lucia uses black and white as it “…captures feeling, emotion and people more than colour. Colour captures clothes and environment.” Upon hearing this phrase and observing her photographs simultaneously - it is clear this is not a cop out in any form. Lucia’s Giants series (pictured first) introduces a newfound humanistic perspective to the photography scene, rebirthing feelings and memories from the rise of infamous portraiture artist JR. Although pursuing an artistic profession in what some would call ‘later in life’, Lucia’s photography is on an early path destined for great success.

As well as being a photographer, Lucia is a creative director within the advertising industries - having worked with globally leading brands in tech, health and fashion. She acknowledges her success in this area however longs for the independent and spontaneous creativity that lies within her photography. “Everything has to be planned so specifically in advertising. Every single prop, angle or movement is meticulous. With my photography - the only brief is to capture life.”

After struggling to find a way to verbalise the intriguing atmosphere of the exhibition, it struck me as a museum of life. Through the exhibition, we observe our modern self through a distant window which emulates similar feelings from the first encounter with an aquarium or nature reserve. Awe and curiosity is highly prevalent. Subjects are mainly human(s) captured in moments of candidness and busyness. Neighbourhood poker games, pint-requesting punks, dog dates in cafes and skaters in Times Square are just a fragment of the diverse scenarios in which Lucia presents. If you’re feeling somewhat disappointed or in disdain with modern society, Lucia’s photographs breathe life in to what may seem an increasingly robotic world.

As well as her exhibition, Lucia’s book titled 'On The Street Where You Live', provides further observation through her lens. The simplicity and candidness of pure human moments (whether we admit them to be so or not), allows a new perspective of observation - one which has been unfelt for years.
It is heavily advised not to miss this exhibition, running until 15 May @ J/M Gallery, 230 Portobello Road. 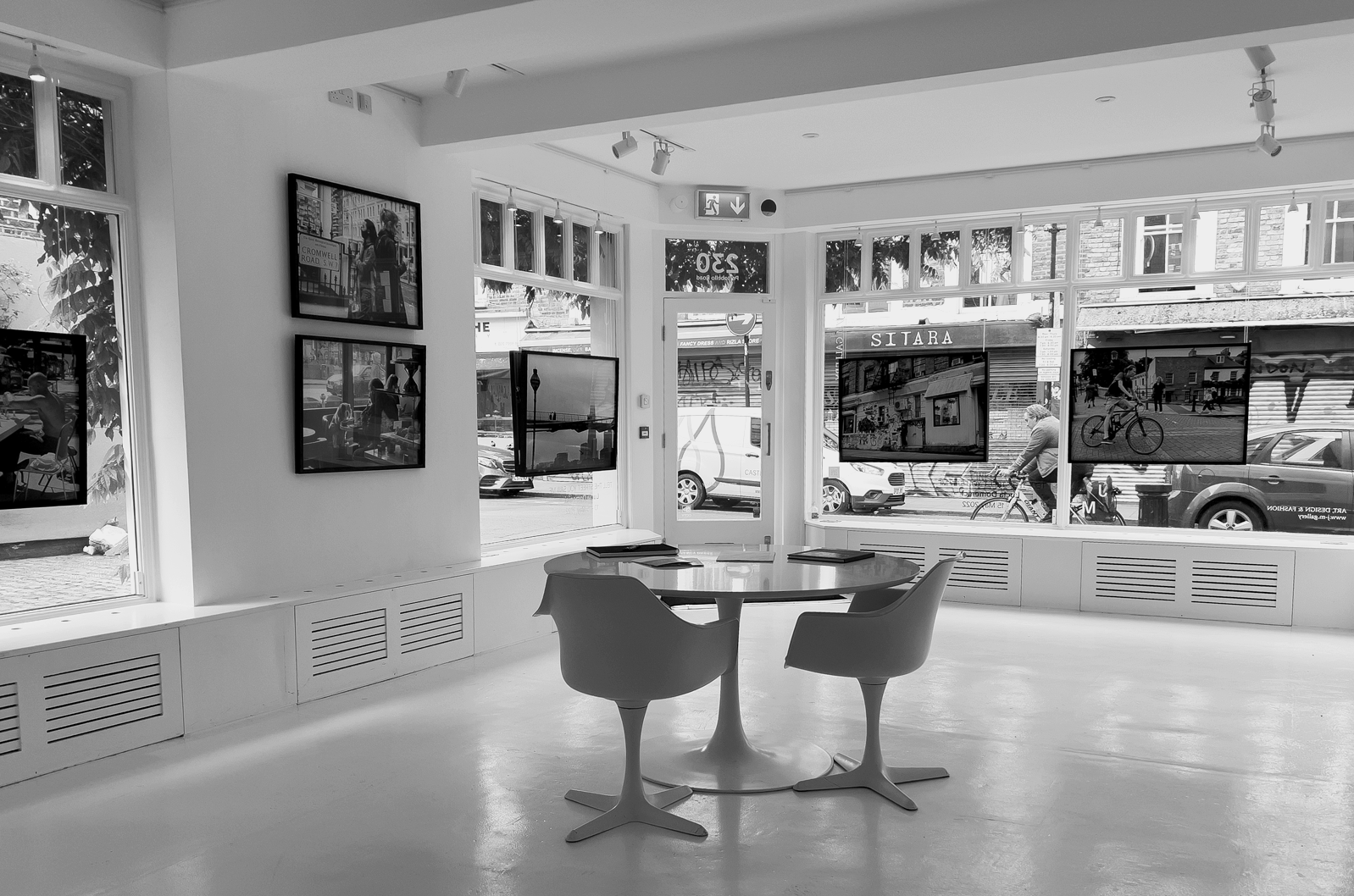 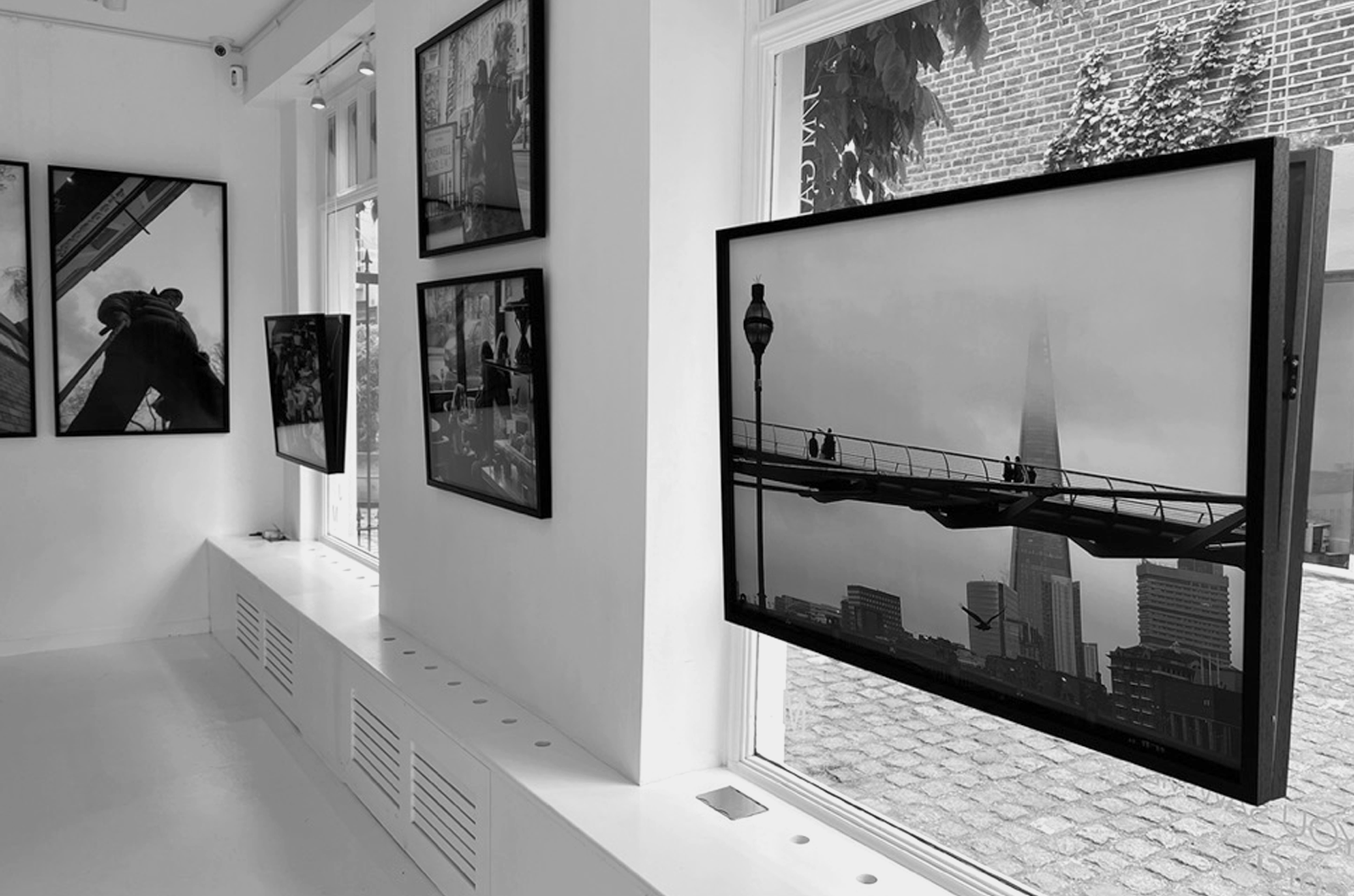 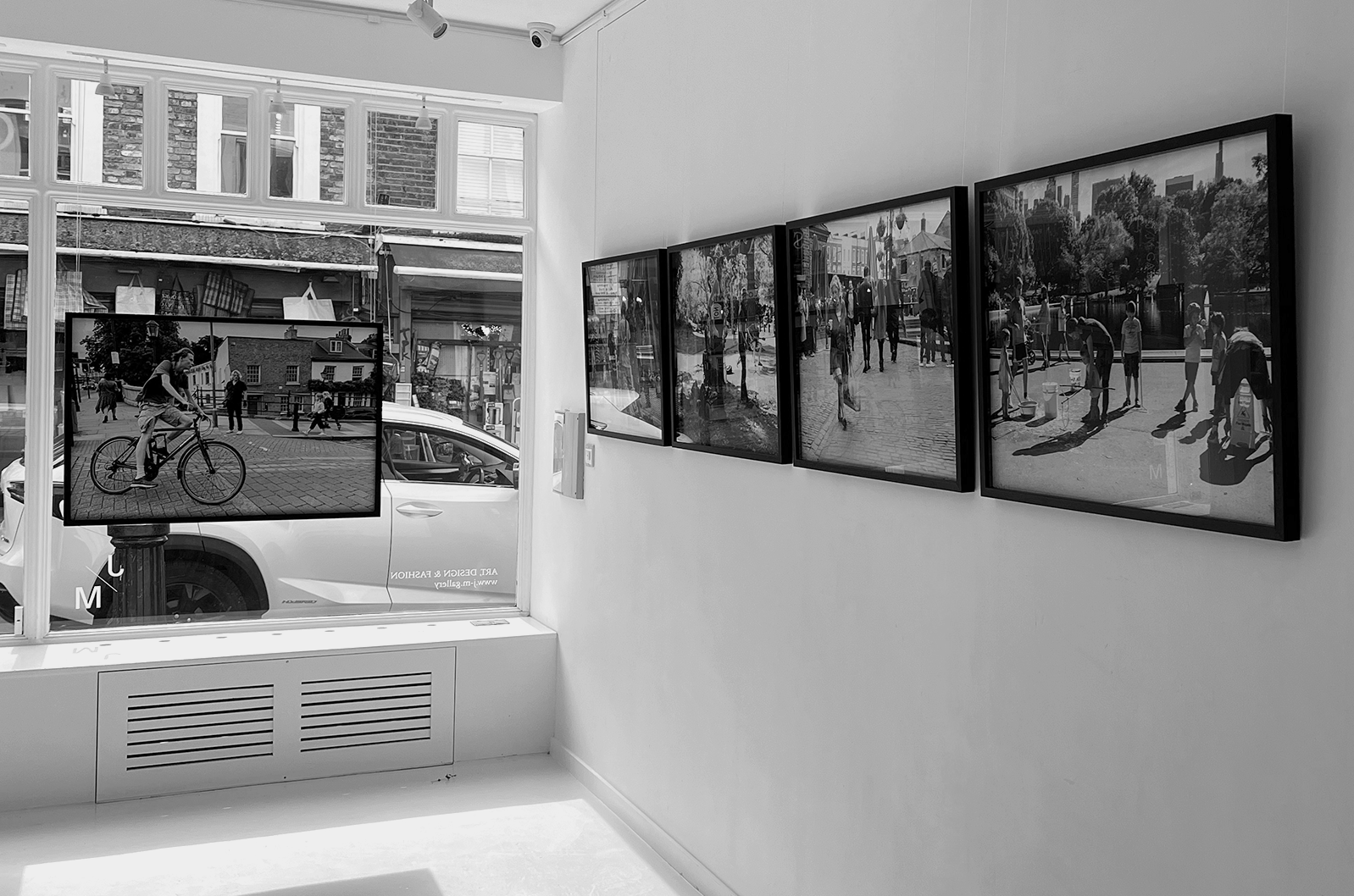 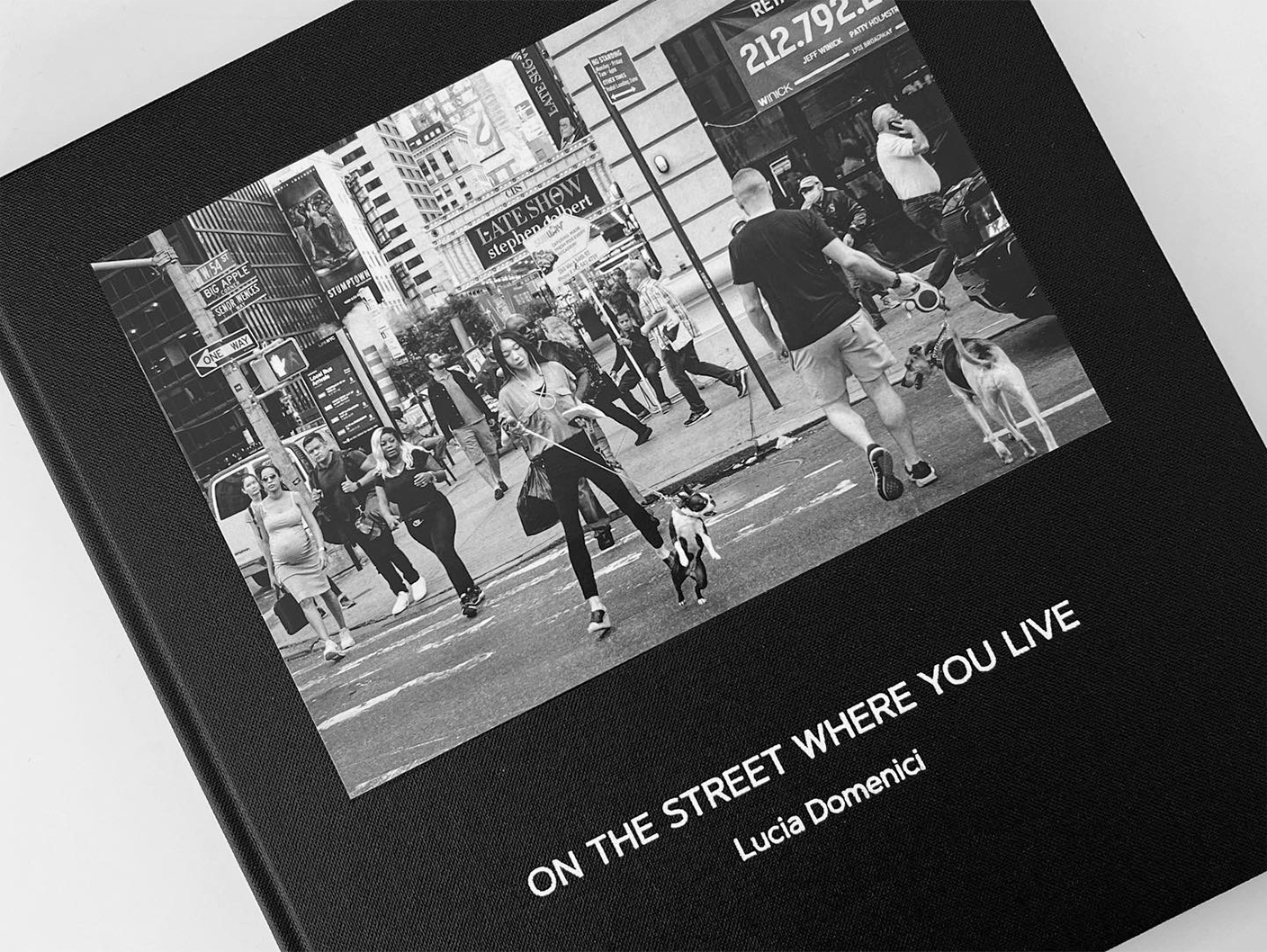 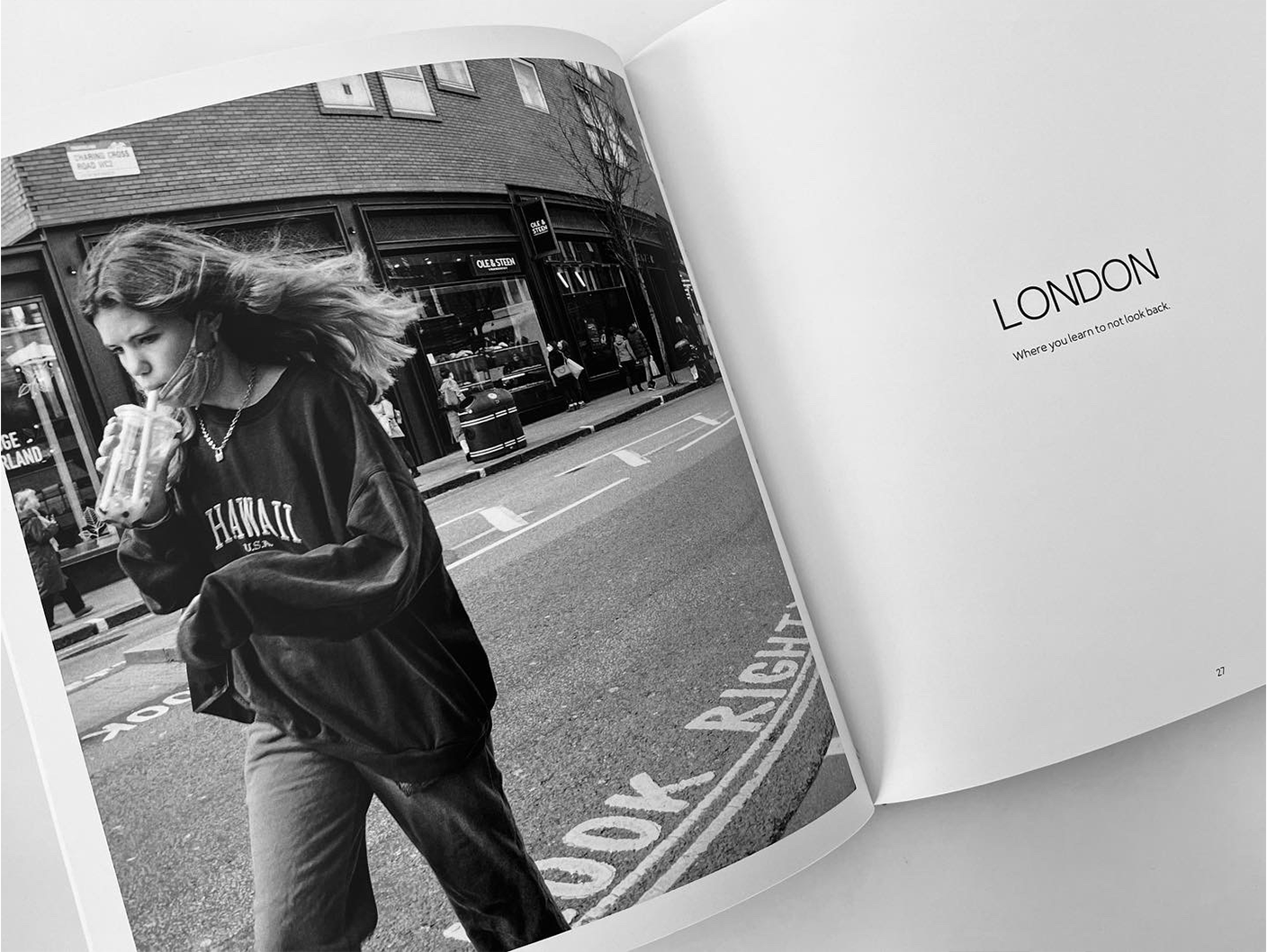 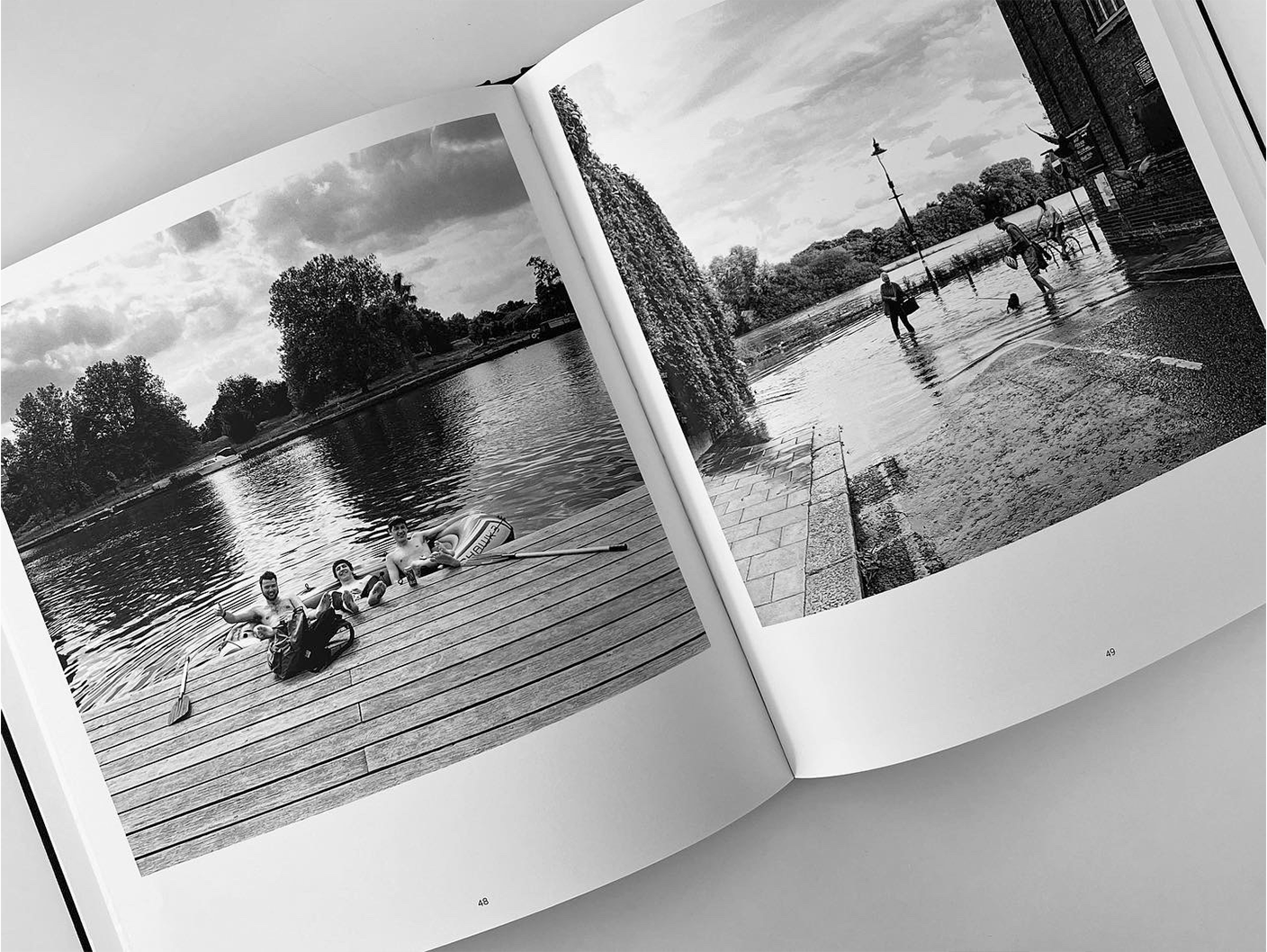 On the street where you live
Lucia Domenici - photobook
£75